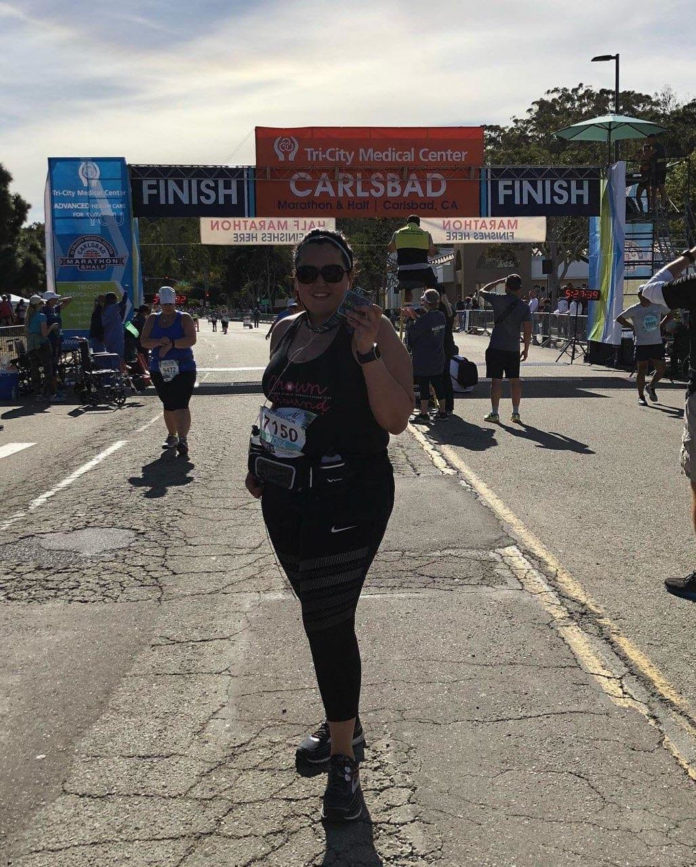 Every New Year brings with it a host of new resolutions without fail, and one of the most popular ones is to run a marathon or a half-marathon. This edition of In Her Shoes comes with an unexpected pair- County Supervisor Nora Vargas has a collection of high heels and boots that keep up with her remarkably busy schedule between meetings, press conferences, and community affairs to name a few; however, when we asked her to share with us her favorite pair of shoes we were in for a twist!

After her mom passed away eleven years ago, she realized that taking care of herself and trying to put herself first was something she did not do very well and that needed to change. Like many of us, she has always struggled with her weight, something that she battles continuously from diets to workouts. In 2010 she did her first 5k walk for her birthday and asked her family to do it with her, she remembers it was the San Diego Color Run. Her family joined her in this fun event, but it was a wakeup call for her when she realized that she could not do it for the life of her. “I was so out of shape and I promised myself that this was the beginning of me taking care of my health.” And this led to her first pair of tennis shoes, she began running 5k races and training until she began running half-marathons. Running became such an important part of her life that not only she became more fit but running taught her a way of life- a new mindset. The adage “It’s a marathon not a sprint” became very real to her, she learned to apply it in her daily life to help her accomplish her goals. She tells us that if you have never run a half marathon, which is 13.5 miles, and if you are not what they call an “athlete” you can’t fully understand what it takes; you need to have a lot of focus and discipline so that you can get to the finish line, and the only way to do that is by making sure that you are present, and focused.

For her, if she could really focus on the half marathon it could change her life, it was important for her to be well in order to take care of everyone else. Her pair of running shoes can definitely tell her story, not only did she use them to run half-marathons, they proved helpful in running for office too. They were her loyal companions during the endless precinct walks, and they were a reminder that this race, too, was a “marathon, not a sprint”. Running for office has many of the challenges that running a long race has, there is an excitement at the starting line, but you must really have a strong will and persistence once the miles begin to pile up. You may face an excruciating hill, perhaps a negative publication, or another runner might pressure you, like an opponent; your physical strength weakens, you don’t get much sleep and you have commitments back-to-back. At the end, it is really your mental discipline that gets you through the last few miles on to the finish line. It is no coincidence that she would choose this pair as her favorite, Nora Vargas truly has the discipline, focus, will and persistence needed to not only run any race but to serve. These are core characteristics of her work ethic. We love to see Supervisor Nora Vargas as she hits the ground running with this awesome pair in her new role watching over District 1!