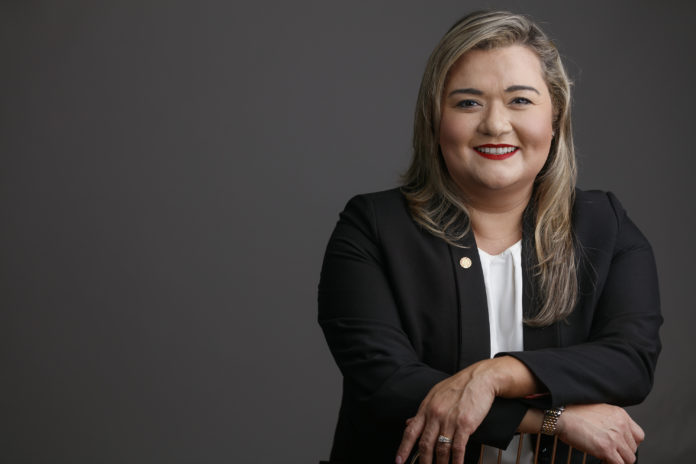 Vivian Moreno was elected to represent the City of San Diego’s Eighth City Council District in 2018. She’s a “tía” of four kids, her brother is a single dad so she fills in the aunt role whenever she can. Her mother is from Los Angeles and her father is from Ensenada, he worked in the canneries while her mom had a small grocery store in Ensenada, and from age 10 Vivian would help her mother at the store. She also saw her mother work for 41 years at Jack-in-the-Box, she credits her own work ethic to her mother’s example.

To describe who Vivian is today we share the introduction to her public biography as the best way we can begin this journey behind her sage personality:

In an intimate interview with Vivian we delved into her values, her vision and her take on being a Latina in leadership.

During the pandemic Vivian got married, something that surprised many people as she had kept this relationship quiet, even though she is a public figure. The two had been dating for a few years, they met before her political campaign had been launched. Her connection to him is more than the joy the relationship brings, to her it is a foundational piece of a holistic life. She explains that to her it is very important as an individual to have many facets of who we are, that we can’t just be one thing. She believes that as Latinos this is more emphasized because we are pulled so hard by our families. Her family has always grounded her, when she visits her brother’s house she is just “aunt Vivi”, chopping potato salad like everyone else in the room.

The pandemic was an opportunity for her to grow and internalize her priorities. She read a lot of financial books, many of which said your husband is like a business partner, so she believed that if she was to see herself as a business, or as a whole person, every aspect had to be balanced.

Getting married was not an impulse, she had always focused on work and although she had dated people, this time she was very intentional. She needed to spend time on fulfilling this part of her life because, to her, it was a foundational piece that balanced out her life.

Vivian says that balance should be all-inclusive, with her husband, with work and with oneself. The spiritual balance in oneself is one that she is consistently nurturing. One of the things she did early on during her first year in office, she sought her Catholic confirmation, a ritual that solidifies her faith.  “Every single time I make a tough decision I pray ‘God please guide me in the right direction’,” she reflects. This strong conviction of faith, typical of Latinos, is for her another of the foundational pieces that keep her in balance.

Vivian has been in office three years, in this time she has completely changed from who she was before and how she views life now. “Just in general, when you’re in politics it’s like dog years- one year is like seven” she says, and this is because having worked closely with Councilmember David Alvarez she already had plenty of experience in community engagement and local policy; but the massive growth came from carrying the weight of responsibility now as an elected. She knows that the decisions she makes are going to change people’s lives and she believes that this pressure makes you grow whether you want to or not.

Her perspective has also shifted to a deeper understanding of what truly matters. During her first year in office her brother was diagnosed with a brain tumor, and this made her see things differently. Dealing with the darker side of politics became something she was able to compartmentalize, her focus shifted more to her commitment to representing her district in what she calls a “dignified way, to be a champion for the community”. In this way, seeing the fruits of her labor was more important than the political struggles that are the nature of her position. The successes she began to harvest, like a $300 million dollar funding for the transboundary water in the Tijuana River Valley, is what motivates her to keep moving forward. These experiences are what she believes have changed her, she now realizes the power that is within her position and the massive responsibility to go on.

Vivian was very young when she began her career in politics, she remembers that it was very intimidating for her as a staffer, she would walk into rooms with predominantly white men, twenty or more years older than her. Unfazed, she would always refocus and realize that political representatives should reflect the population they serve, and so it was important for her to stand up and be supportive of one another, and that sometimes that meant stepping to the side and letting them do their thing.

As a Latina one of the greatest challenges that she feels impacted her career was not feeling supported by other Latinas. “The toughest part [running for office the first time] was not having other Latinas support me. That was horrible to me, and to go to the point of actively opposing me, that was gut wrenching.” she shares. Still, she continues to help younger Latinas in her community. She points out that there aren’t a lot of Latinas running for office, and that she highly encourages them to get involved because about 50% of San Diego consists of Latinos, and our voice matters and it will continue to matter in a strong way.

A wiser Vivian today believes that as we move up we should not only reach up, but reach down and bring people up with us.

MISSION, KS — May 17, 2022 — (NOTICIAS NEWSWIRE) — (Family Features) — Many people are fearful of developing Alzheimer’s disease, especially those with a family history of the condition. Researchers are investigating innovative treatments for Alzheimer’s and other dementias, but no cure exists right now. There are steps people can take, however, to help …