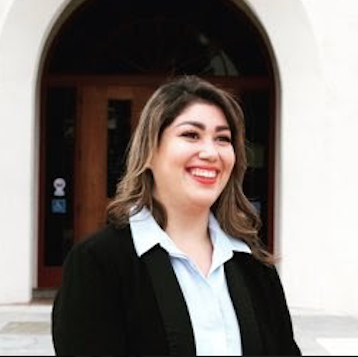 There is so much power in these words, this is how newly elected Chula Vista City Councilwoman Andrea Cardenas defines her success. While these words may seem to be simple, their power lies in applying them into every action and aspect of her life. Councilwoman Cardenas empowers her team, her family, her community, and anyone who is lucky to be around her. Don’t let her quiet disposition and humble demeanor fool you, her young age is a paradox of her sage wisdom, and her fresh spirit and genuine personality drive her passion to serve.

Born to immigrant parents the youngest of three, Andrea was brought up to believe in herself. She grew up in a quite different family dynamic than what we know as traditional. Her parents managed the family with true democracy, they had family meetings where all children had a voice, even Andrea at 3 years old had the freedom to voice her opinion with the same respect as anyone else. That kind of power was impressed on her and has taught her to trust her instinct, learn from other people, and be comfortable making mistakes.

As a natural introvert, Andrea found pleasure in learning. In her elementary years she was a student of the GATE program, a school program for gifted and talented students where she was exposed to different learning experiences geared to expand the educational potential of children. She always got completely immersed in the subject at hand; one semester they focused on chess, so she wanted to become a competitive chess player, and then there was the year she learned astronomy and that was it, she was now going to work for NASA. It was this passion for learning that later in life made her consider a career as a teacher, her appreciation for the teachers who made a difference in her life made her want to do the same for other children. While teaching was her passion, she felt a commitment to become a lawyer like her father who was a very prominent attorney in Mexico. Her true calling, however, was planted in her when her brother introduced her to politics and she became more involved with local campaigns and advocacy, getting young people engaged. She understood the cultural significance to our immigrant community, Andrea remembers a message impressed in her by her brother when she was young. He asked her to take a look at their own father, a prominent attorney in Mexico, educated and respected in his field; but when he came to the U.S. he was just an immigrant. She could see that our society strips away our community of their strength when we just see them through one lens. This vision that as a community our confidence and self-esteem is shut down in a very deep level when we come to this country impacted her deeply. Andrea’s ability to recognize these cultural limitations fueled her need to get involved and volunteer in campaigns, she discovered that she was good at managing people and organizing them; she helped young people see the importance of the work they were doing.

In 2016 Chula Vista Mayor Mary Salas posed the ultimate question, she asked her if she would run for Council. She had to think really hard about it, her brother was opposed to it because the exposure is huge, they know all too well the criticism can be really harsh and the reality of being an elected official is less romantic than what we see in the media. However, she sees the demanding work of representing her district as an opportunity to help others, to continue to empower not just the community but the way that City Hall will operate, making systemic change that will impact future generations. Andrea knew that she was equipped to take on this task because from an early age she allowed herself to learn from every opportunity that was given to her, with the same passion she put into her chess class or her astronomy class as a child. Her innate need to be fully immersed in the matter at hand has led her to amass a wealth of knowledge from being an organizer, working at the registrar of voters, working for non-profit organizations, political campaigns and even being part of the Mayor of San Diego’s team. She has worked with democrats as well as republicans, with her own liberal and progressive mindset of which she is keenly aware. She accepted the challenge and ran for office in 2019. Throughout her campaign she committed to staying true to who she is, never compromising her integrity for the sake of winning an election. To do this she relied on her community, her family and friends that have been her safety net, because no matter what the outcome was, they would be there to catch her. She successfully won the election on November 3rd.

Her biggest advice for Latinas is to “find your community, find people who are going to keep you honest, they are not always going to agree with you, or you with them, but that is powerful.” She believes that it is important to give people the opportunity to be kind. “Learn to know yourself, what you are good at and what you are bad at. Take the opportunity to fail, it is so much more important than the opportunity to succeed. I am lucky to have a strong community in my family, my friends and colleagues, because of them I get to be myself because… why not? So, find your community and be yourself because… why not?”

We celebrate Councilwoman Andrea Cardenas for paving the road for immigrant Latinas and for dedicating her service to being a beacon of light to the community.