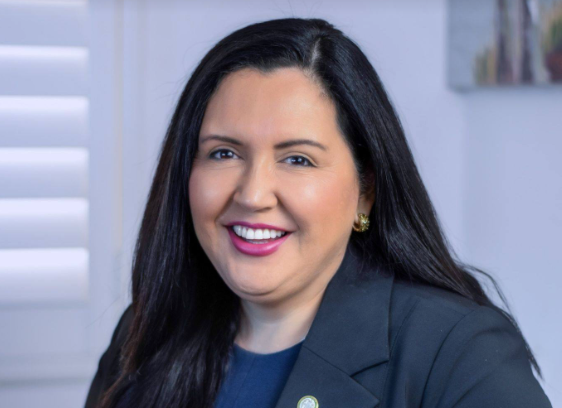 How does a person become limitless? How does a woman become a leader? How can an immigrant Latina have an indelible impact on her community? Nora Vargas has a humble beginning, but not a humble ambition. She has made it her life’s work to lift women up and to make sure everyone has access to the opportunities our country offers. This is a very tall order for an immigrant Hispanic woman, but when you believe in your mission 150%, even this seemingly challenging goal is just another day at the office for someone like Nora. We met with her virtually to learn about her secret for success, what she revealed to us was her core nature and relentless spirit- she allowed herself to be vulnerable. She opened up to us the way she approaches everything… with corazón.

On November 3rd, 2020 Nora became the first Latina to be elected to the San Diego County Board of Supervisors, this amazing achievement is certainly one we celebrate; however, it is not a new experience for her, in 2015 Governor Jerry Brown appointed Ms. Vargas to serve on the 12-member California State Teachers Retirement System (CalSTRS), making her the first Latina to be appointed in the board’s history. So how does she do it? How has she paved the way for so many Latinas?

Nora was born in Tijuana, Mexico and like many immigrants was raised in both sides of the border. The values that her family instilled in her from an early age remain strong in her character such as the love and respect she has for her parents and the responsibility of being a positive role model for her nieces. Her mother passed away eleven years ago, yet she is a very present voice in all her decisions. Family is at the root of every step she takes, in her words “I think my parents are the foundation of who I am today, they created the values I hold close and they always told me that I can do whatever I wanted.” She began her studies as a transfer student at Southwestern College, she loved politics and was inspired to make a difference, even then she understood the power of higher education. As immigrants, nobody in her family understood the American system of higher education, so being in environment that was accessible to her helped her navigate what was extraordinarily complex at times. This allowed her to transfer to the university of San Francisco, and that is really where her world was completely changed. USF is a social justice university, led by the Jesuits and their principles and curriculum really shifted the paradigm of who she was and what it meant to do the work she was doing, and why it was so important to be an advocate. The seed of service had been planted deep into her soul.

Armed with a solid education and a need to serve, Nora was ready to break glass ceiling which eventually led her to becoming the Vice President of Community and Government Relations at Planned Parenthood of the Pacific Southwest. There Ms. Vargas and her team worked to increase access to safe, quality healthcare and education for women and families across California. At Planned Parenthood she became a better executive, it made her the leader that she is today; a transformational leader, someone who is a change agent, someone who has served as the first in numerous capacities. In her role as VP, she put into action the vision of community engagement, of course she was proud of being the first Latina in this role, but the secret to her empowerment was in no small measure her boss and mentor, Darrah D. Johnson, President and CEO at Planned Parenthood of the Pacific Southwest, who taught her how to lift other people up and to not be afraid to support them and encourage them. As she shares this with us it is obvious that she is getting emotional thinking about it, she tells us that this is because that had not been her experience in other roles so, it was powerful to have someone trust you and believe in you, and to know that they had your back. She has taken this lesson wherever she goes. One of Nora’s priorities has always been helping women, especially women of color, providing them tools and access to the resources they need to take their lives to the next level. She knows the importance of being pragmatic to achieve these goals, but it was under Darrah’s leadership that she learned to do it with kindness and compassion- the kind that you need as a leader.

Nora was not expected to resign to her executive position at Planned Parenthood while running for office, there were several administrative options she could have chosen to take the time off to focus on her campaign. However, she knew that Planned Parenthood is the biggest healthcare provider in the region, and she thought it would be a disservice to them if she was not able to be there 150%, particularly understanding the needs around reproductive health and the impact that then current administration was having on this issue. Because she so loves the organization, she knew that walking away was the right thing to do.

The 2020 election race for San Diego County’s Board of Supervisors was a historic opportunity for District 1 to elect a representative that understood their needs. Nora knew the only way to be that leader required her to give 150% to the campaign and really focus. She needed to know that she gave it her all. “I wanted to wake up on November 4th in the morning and, no matter the outcome, I would know that I did everything possible to win this race” Nora tells us. She is no stranger to political races, both as an organizer and catalyst to other elected officials, but also as a Board Member of her alma mater Southwester College’s Governing Board. She went through the appointment process twice, and the first time she did not get it because she was in the process of having a family, and as she herself says, for women that is always part of the decision process. As the universe would have it, a family was not in the cards for her at that point and when the position opened a second time, she ended up deciding this is what she wanted to do. She would become an advocate for the students and be their champion, she knew she could do this because she herself had been through it. She is immensely proud of the work done at Southwestern College and recognizes that there is still a lot of work to be done- she believes there is a huge need to look at students holistically, not just their grades which is imperative, but also their basic needs like food, housing, and transportation. That is why running for the County Board of Supervisors was so important for her, the ability to make a bigger impact, not just for the students but for their families and communities.

She is aware that it is a great achievement that she is the first Latina elected for this role, but to her the whole point is that she is not the last. And it is not just about electing a Latina, it is about understanding the infrastructure that must change so that any woman, not just a Latina, can thrive. To her it is the difference between holding a title and really knowing what it means to be an advocate that can be effective and get things done. For her is about being able to shake the system by making sure that you understand all the moving pieces.

Women, particularly women of color suffer from imposter syndrome but for Nora this may be the first time in her life that she does not have it. This is meaningful and fulfilling because with her 25 years of experience and knowledge she knows she brings a lot to the table. She knows the task is enormous, but she knows how to ask the tough questions, she feels that she is finally where she is supposed to be. She has assembled a team of social work warriors within her staff and outside allies; her vision is to have the community at the forefront driving policy. “We are in a very challenging time, we are faced with one of the major pandemics that no one has ever gone through, and to be able to make sure our communities are vaccinated, to be able to have conversations about real economic recovery, and to know that I have helped people get what they needed in order to survive and thrive in the future- to me that’s what I want to do, how do I make a person’s life better?”

As we near the end of our interview, we ask Nora what she wants her legacy to be, she tells us “I do not want families to struggle, I want them to have the same opportunities that I have been given. This country has been very good to me, as an immigrant woman I want other people to have those same opportunities, I want them to have a better quality of life. I wake up every morning fighting to make sure that they do, and  I want to do it with kindness and respect, really putting aside the political nonsense and bring people together. I strive to be the best public servant that I can be and really focus on the community, it is time to create systemic change to better the future of our community. This year I became a dog mom of Rocco, and it is a different journey that I think that I am on now. I am open to whatever is in my future and whatever the universe has for me, I feel very fulfilled and happy.”