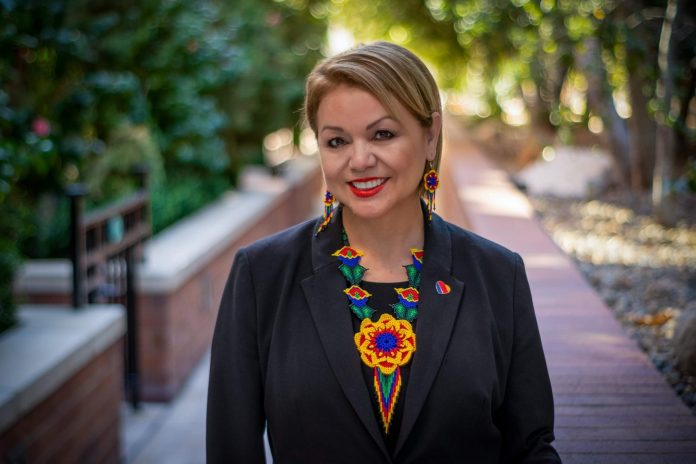 It’s a common cliché to say that we all have a purpose, a destiny; that somehow the universe has a plan for us. Some of us spend a lifetime searching for that purpose, but for a rare few the purpose finds them. Lidia S. Martinez was in 7th grade when she got a flyer from Southwest Airlines that caught her attention and planted the seed of becoming a flight attendant. This thought simmered in her, but soon melted away in the mix of teenage life. After close to 30 years of a successful career at Southwest Airlines she is currently the Manager of Community Outreach overseeing regional efforts across the nation and tapping into the international market. Her story begins in the border city of Ciudad Juarez, Mexico.

Her humble beginnings mirror the lives of so many immigrants. Lidia was born in Juarez, a city historically poor and politically troubled. She grew up with 10 siblings in a very poor home, where her mother was the lead as her dad was often absent. Her mother was the strength that raised each of the 11 children with dignity and values. Her mother was a housekeeper at a hospital in El Paso, Texas, which meant commuting daily across the border, having to rely on her children to look after each other. And that is what they did; at the tender age of 7, Lidia and her siblings, all between ages 5 and 9, stayed home alone while the older ones attended school. One of her sisters would use bed sheets to cover the windows so that people could not see them and entertained the younger siblings by giving them rides around the house on a mop. These are the happy memories that remind Lidia that happiness is where love is, despite the poor circumstances that surrounded them.

Her mother found a way to immigrate them to the United States little by little. With the support of her extended family in the U.S. side, she brought them in clusters of three with letters of recommendation from an uncle who was a Commissioner, guaranteeing that these children would not be a burden to the country. And this guarantee has become an absolute understatement when it comes to Lidia S. Martinez. Lidia had such a sense of responsibility and respect for her mother, and her family, that at age 12 she began working at a local market and contributed all her earnings to her mom, a practice that she continued even after college. She was the first one in her family to go to college, only she and her younger brother were able to accomplish this. Her older sisters worked at the sweatshops, something that inspired Lidia to go after a career so that she would never have to be forced to work under those conditions. The huge respect she had for her older siblings, their sacrifices and their love were the fuel that helped her reach further. Being the last one to leave the home, Lidia took on a protective role towards her mother.

After high school, Lidia didn’t know what career to pursue, but she knew she wanted to study, so she enrolled in community college. One of the greatest frustrations she felt from her college counselor, as well as her high school ones, was that they would advise her to take jobs at the local sweatshops as receptionist, or to take a bookkeeping class instead of an accounting track. Limiting her aspirations, instilling no confidence in her capabilities- to a girl who had better grades as a sophomore than the seniors of her school. Even today, she feels a great deal of disdain when she hears the stories of high school counselors who ill-advice students to take courses that undermine their capacity. In college she met her future husband, Ted Martinez, the Dean of her college at the time. He looked at her plan and changed it completely towards a vision to transfer to a four-year university. In 1989 this dream came true as Lidia graduated from the University of Texas at Arlington with a Bachelor of Science in Business Administration and a minor in Marketing, just months before giving birth to her son Teddy. She now had a degree, something to make her mom proud and honor her sisters’ sacrifices. She was ready to conquer the world, so she began to look for opportunities. This is when she started working with Southwest Airlines. She was invited by the VP of Marketing to apply for a secretarial position, she recalls that she felt so insulted, and embarrassed to even consider it. In her mind, how could she tell her mom, after all her sacrifices, that she would be a secretary. As life would have it that position was taken by a woman with a master’s degree, in light of this she was offered the position of receptionist, an even lower grade position. This experience put everything in perspective for her, if that woman with a master’s degree would take a secretarial job, she too could swallow her pride and take on the receptionist position. A move that proved to be the right choice, Southwest Airlines had a plan for her. She stayed in this position for only two months and was soon promoted to a position where she stayed for two years. As her family had to move to Chicago, Southwest Airlines created a position for her at the Chicago Marketing Department. By now she had proven herself and continued to learn from every opportunity she was given. Always putting her family first, in April of 1999 her husband was offered a position in San Diego, and Lidia stayed behind to let her children finish the school year. Still, she knew that she would need to find a job in San Diego and her chances to remain with Southwest Airlines were very slim, she had a 2% chance of being able to be placed in San Diego due to its high demand among employees. Lidia applied nonetheless, and when positions shifted, the hiring manager held the position for Lidia until she could relocate with her children in the summer.

Over the years she has managed to remain relevant to her company by bringing to the table her secret sauce: the nature of her giving spirit and her deeply rooted sense of community. Her own journey has now transformed her into a leader that understands the individual fabric of local communities, the impact of their multicultural backgrounds and the socioeconomic designs that shape them; mostly because it is what she lived herself. In 2018 Southwest eliminated her position and she considered retiring and calling it a day, after all she had had a successful trajectory to be proud of.  But life still had a plan for her. The company separated the national community outreach into local regional departments that she now oversees, and they have opened their spectrum to include their footprint of international markets. As much as she thought she was done, she found a new way to re-energize herself and reinvent her role once again. Because of her upbringing, Lidia’s spirit of giving is one that is personal to her. When she hears the needs of people or the challenges they face when they lack resources or support, she knows what it means because she lived it herself. There is a genuine passion for helping others that is deeply embedded into who she is, how she works with her team, how she relates to communities. She connects with people in a genuine way because she sees herself in so many people. She has been in their shoes; she has been in those situations. The immigrant stories are her stories, she understands the sacrifices of people who live in Tijuana and work in San Diego because she lived them firsthand.

“She knows that growing up on the border shaped her awareness of the gifts that immigrants bring to the table such as culture, tradition, values, hard work and great talent. Southwest Airlines is known for the heart in every aircraft, Lidia absolutely embodies that heart. “

As we near the end of our interview, we ask her what message she can send to all of you, our Celebrando Latinas Magazine readers. Hard working women who are pursuing your own dreams, your own businesses with your own families. She calls on women and young girls to be your own best advocate, to believe in yourselves and don’t wait to be validated by someone else. Her advice to our Latina readers:

“Work hard for your brand and protect it, at the end of the day it will open doors. Find mentors, even if not official ones, stretch yourself and look for a mentor that doesn’t necessarily look or think like you, people who you admire and can learn from. And ask them for help and support, ask them to help you grow.”

Her journey has shaped who she is today, her ability to be proud of her accomplishments and her heritage, as well as her humility to work hard and in partnership with her team.  She is a model of integrity and hard work, the kind that leads to earning the respect from your community, your colleagues and the industry. She has been recognized on many levels for her leadership, her community work and her philanthropic support. But to Lidia, more important than any other accolade is the respect and love of her family, who has been her strongest pillar, her greatest inspiration and her very source of happiness. From rides on mops, to the birth of her son Teddy and her daughter Melyna, to driving her mom around in the style of Driving Miss Daisy. Lidia S. Martinez has had the courage to soar from a little town like Juarez, to every corner of the U.S., and now to the rest of the world. We CELEBRATE Lidia because to her, the sky is truly the limit!