In  October at the Golden Nugget Hotel in Las Vegas, the 37th National Association of Hispanic Publications (NAHP) was held, with the participation of important speakers such
as Dr. Benjamin Chavis, of the African-American Newspapers organization, NNPA; National President of LULAC Domingo Garcia; lm producer Moctesuma Espaza; Congresswoman Dina Titus and Cid Wilson, president of HACR, were some of the participants.

Fanny Miller, President of the NAHP, Director of El Latino and founder of Celebrando Latinas Magazine brought a message to the members, “improving our publications through support, we can learn a lot from one another,” Miller said.

The four days were full of activities with the same objective, to assert the strength of the Spanish-language media and to provide tools for success.

“I feel very proud for these awards, they are not mine, they are for
El Latino, thanks to the people who make it possible”, said Fanny Miller, Publisher and Editor of El Latino, “our intention is to give the community clear and important information for it’s development in this country”. 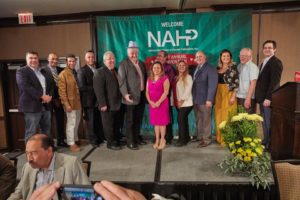 During the conference dierent publications was recognized: 105 years since the founding of El Diario La Prensa in New York; 65 years of Diario Las Americas in Miami; 40 years of La Oferta in San Jose; 35 years of El Popular in Bakerseld; 30 years of El Aviso, El Clasicado and El Latino, three of the largest publications in Southern California. The history of newspapers such as El Nuevo Georgia, Al Día Dallas and others was also recognized.

Among the speakers attending the Annual Convention, one of the highlights was the talk offered by the president of LULAC, Domingo García, who made reference to the great effort that this organization has made seeking to protect migrant children who have been separated from their parents, many of which are being held in shelters in the community of Tornillo, Texas. “LULAC is the national voice that speaks for all Latinos”, he said, making a chronological account of the struggle that this organization has waged in favor of the human rights of migrants.