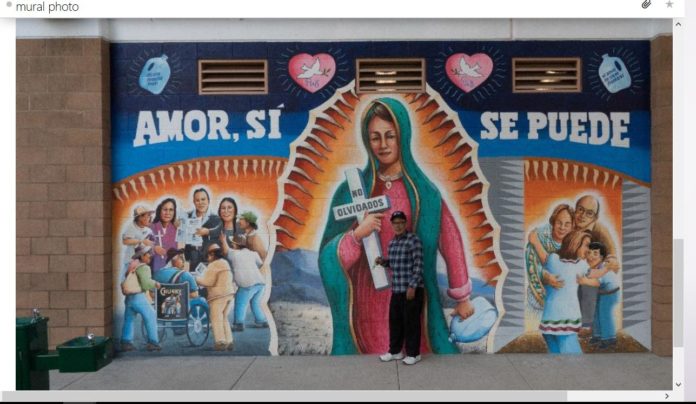 Salvador Barajas is now an icon in the art circles of San Diego, and for many Mexican-Americans and the Chicano community he has given them a visual voice that they can identify with every time they see one of the murals he has installed  in Chicano Park. He was born in Nio, a small town in the province of Sinaloa, Mexico. For more than five decades he has dedicated his career in the arts through publicity pieces, illustrations and recently fine art. He has a varied portfolio of work and, even though many would consider a 50 year trayectory a fulfilling career, he believes there is much more to learn.

Salvador is a unique breed of artist that blends his broad experience in technical art with his talent. His art speaks to the challenges that this community faces, it speaks to their roots and their ancestors as well as of the sacrifices they have made in search for a better life. He was the force that led the way for the restoration of the Chicano Park murals, giving them life again. But behind the artist’s’ eye, which is the essence that the community breathes, there is a man of intellectual strength that made the process of renovation come to fruition thanks to his highly technical, comprehensive restoration manual that he prepared and oversaw for the approval of Caltrans. His work was not only a thorough study of the history, technique, legal background, environmental impacts, tools and methods of the restoration process; the manual itself is a piece of art, aesthetically put together and a publication worthy of display.

He was recently commissioned by Border Angels President Enrique Morones  for a mural supporting the mission of this non-profit. When he was approached by Enrique he knew the image he wanted to imprint on that wall at once. This is his second mural in Chicano Park and it is yet to be named, but he calls it “La Virgen de Guadalupe Como Activista” ((The Virgin of Guadalupe as an Activist”). Next to this work one can appreciate the Great Dame Dolores Huerta, whom he has included in other two murals here in San Diego. Salvador is a role model for our Latino community, he has made a name for himself in the arts, particularly in the field of education where he has built a collection of hand painted posters that promote diversity, bilingual education and graduation for students. He is passionate about education, sports and people and is in love with his wife Leticia and his four children, all four graduates of California Universities. We have heard many times that what we do is not who we are, however, Salvador Barajas is the absolute exception to the rule. He is an artist in thought, action, heart and spirit.